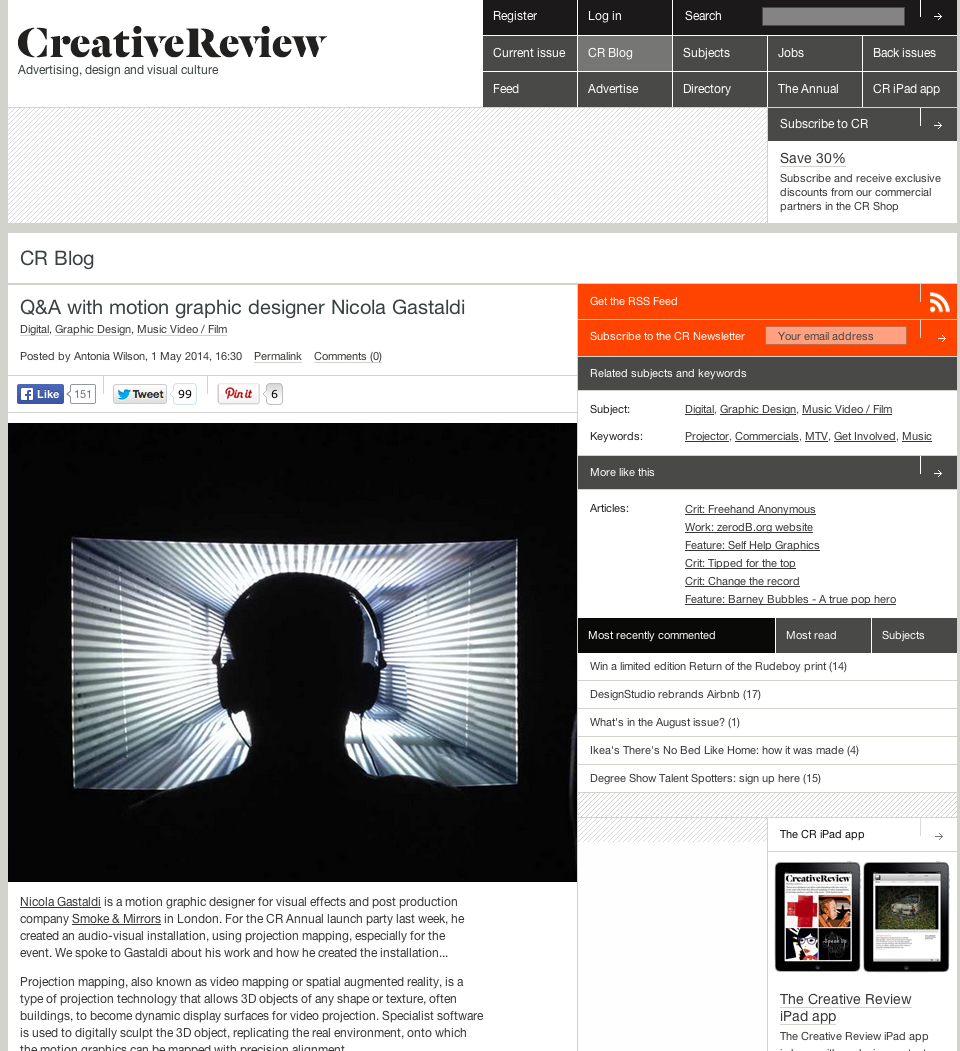 I’ve been interviewed on Creative Review about The Cave and my job. Thanks!

Nicola Gastaldi is a motion graphic designer for visual effects and post production company Smoke & Mirrors in London. For the CR Annual launch party last week, he created an audio-visual installation, using projection mapping, especially for the event. We spoke to Gastaldi about his work and how he created the installation…

Projection mapping, also known as video mapping or spatial augmented reality, is a type of projection technology that allows 3D objects of any shape or texture, often buildings, to become dynamic display surfaces for video projection. Specialist software is used to digitally sculpt the 3D object, replicating the real environment, onto which the motion graphics can be mapped with precision alignment.

CR: Can you tell me more about your background – how did you first get into motion graphic design?

Nicola Gastaldi: I grew up watching MTV and I’m old enough to remember it showing music videos 24-7. Some of them were visually brilliant: Chris Cunningham, Spike Jonze and Michel Gondry became my heroes. In 1999, in Italy, there weren’t any 3D or motion graphics classes, so I ended up doing Communication Studies. Even if the overall approach was purely theorical, some courses talked about experimental films. Zbigniew Rybczyński and Jan Švankmajer added another absolutely important layer to my visual background. Especially Tango, by Rybczyński, it completely struck me.

After university, I became a TV writer but meanwhile I started following some online tutorials about motion graphics. In 2006 I quit my full time job and I became a freelance motion graphics designer. At the beginning the job wasn’t very exciting, I have to say. A lot of corporate videos with small budgets and even smaller ideas. But in 2009, with Mou Factory, we successfully tested and delivered our first projection mapping on a beautiful arch in Milan, and from that day we managed to get more creative jobs.

CR: What was it like to make the transition from personal projects and projection mapping in Italy, to the type of work, commercial or otherwise, that you do now?

NG: The main difference between projection mapping and commercials is the canvas: a building is definitely different from a TV.

Every projection mapping project is unique and generates a totally new technical challenge: from a 60m wide stage in Barcelona with a 10K resolution, to a 360° wrapped 40m high tower in Baku, every time I’ve used different approaches to be as creative as I could, being careful to create something that was visually stunning but manageable in terms of rendering.

Working in London mainly for TV promos and commercials requires a huge attention to every detail. Dan Andrew, creative director of The Studio, helped me to adapt my workflow from live events to broadcast. When I saw my first commercial on air on a UK national channel I was absolutely overwhelmed!

CR: Can you tell me more about the concept behind the installation shown at the CR Annual launch party and its production?

NG: When it comes to projection mapping, the creative process is strictly connected to tangible limits, like the space and the ambient light of the ‘stage’. First of all, the room must be as dark as possible and there must be enough space for the projector to ‘throw’ its light onto the surface.

At the CR Annual launch party I had a narrow room of approximately 4m², that could allow a maximum of 6 people viewing each time. The main problem that I had to face were the possible shadows that the viewers could have cast with a usual front projection – that could have completely killed the installation. To solve this problem, I tried to create a projection mapping from behind (my very first time doing this, and, as far as I know, the first ever).

I modelled the “stage” in 3D and played with it in Cinema4D: a truncated rectangular pyramid could morph into an infinite corridor. Escher, there’s no need to say it, has been the main reference for my animations: playing with different camera focals, inverting the perspective of the pyramid and creating holes, I wanted to cheat the reality. The black and white worked perfectly to enhance the contrast of the projection itself.

To allow the back-projection, I built the pyramid with a laser cut clear cast acrylic and covered with frost film to allow the light of the projector to bounce on it.
I suspended the pyramid with fishing wires to the ceiling, trying to give the illusion that the structure was floating.

CR: What other types of projects do you work on for Smoke & Mirrors?

NG: I’ve been working at Smoke & Mirrors for over than 2 years now and I’m still learning that every project is a new challenge. If it’s a commercial, a TV promo, ident or bumper, a big corporate video or something for a live event, we’re always trying to raise the bar.

We just delivered a brilliant promo for Cars That Rock With Brian Johnson, a new TV show on Discovery Quest, where we had to set a Ferrari on fire; a commercial for HTC involving a phone and a soap bubble; and a video for EE at Wembley Stadium. Each project is from one to three weeks long and we never get bored.

CR: Do you have any rules when it comes to your process?

NG: Technically speaking, I always try to keep my projects tidy and flexible, so that the amends from the client are as less harmful as possible. For personal projects, I need to set limits and strict rules: the panic of the white frame is my main enemy.

CR: What are your must-have tools for the job?

NG: Working as a motion graphics designer means that I often have to deliver the finished product, working on elements from beginning to end. I work with Cinema 4D for the 3D and After Effects for 2D animations and compositing. But I have to juggle between Illustrator, Photoshop, PFTrack, Real Flow, Turbulence FD, Final Cut and even Logic or Ableton Live to create bespoke music or sound effects.

The installation at the CR Annual launch party was a ‘one man show’: I did the 3D animations, the compositing, mixed the sounds, built the pyramid and set the projector!

CR: What are your creative influences and interests?

NG: Maybe now we’re overexposed to motion graphics: it’s everywhere – on our phones, on the walls of the tube, on TV and on YoutTube. Aesthetically we quickly get used to it and it can be quite hard to create something visually interesting now. For this reason, I like watching other studio videos on Vimeo, some of them are really stunning.

A couple of my other favourite videos include Kwadrat (Square) by Zbigniew Rybczyński (1972), and Food by Jan Svankmajer (1992), both filmmakers have had a big influence on me.

Bruno Munari, the Italian artist, is probably my main guide, for his own approach to creativity.

In my spare time I love walking around London, taking pictures of London clocks, playing music and I love to get involved in online 3D contests.

The Maiden Tower in Baku – Nicola Gastaldi (with Smoke and Mirrors)

CR: What advice would you give to someone trying to get into the industry?

NG: Be inspired by other people work and never stop trying to improve yourself – these are probably the best rules to follow.

Being able to work in London in one of the best studios of the world is a great privilege for me, definitely my biggest dream that became true. I worked hard for it and I’m still studying to be able to deserve a place here.

CR: What are you working on at the moment?

NG: We are currently working on a branding video for a major international TV channel. It’s a really interesting project: we’re encasing its animated logo into existing live action movie footage. For each shot, we carefully 3D track it, animate the logo, create additional 3D or 2D elements and composite everything together.