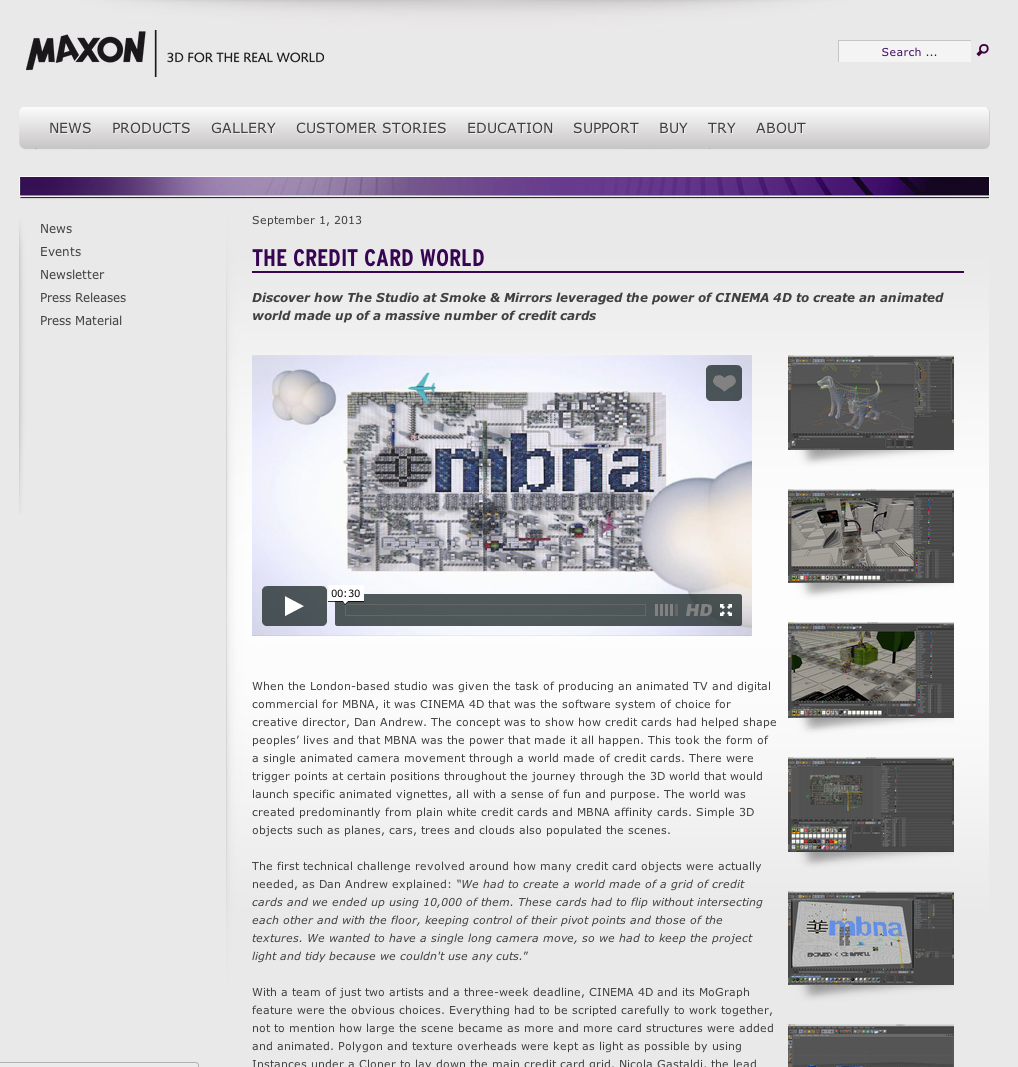 We’re featured on Maxon website because of our MBNA commercial.

When the London-based studio was given the task of producing an animated TV and digital commercial for MBNA, it was CINEMA 4D that was the software system of choice for creative director, Dan Andrew. The concept was to show how credit cards had helped shape peoples’ lives and that MBNA was the power that made it all happen. This took the form of a single animated camera movement through a world made of credit cards. There were trigger points at certain positions throughout the journey through the 3D world that would launch specific animated vignettes, all with a sense of fun and purpose. The world was created predominantly from plain white credit cards and MBNA affinity cards. Simple 3D objects such as planes, cars, trees and clouds also populated the scenes.

The first technical challenge revolved around how many credit card objects were actually needed, as Dan Andrew explained: “We had to create a world made of a grid of credit cards and we ended up using 10,000 of them. These cards had to flip without intersecting each other and with the floor, keeping control of their pivot points and those of the textures. We wanted to have a single long camera move, so we had to keep the project light and tidy because we couldn’t use any cuts.”

With a team of just two artists and a three-week deadline, CINEMA 4D and its MoGraph feature were the obvious choices. Everything had to be scripted carefully to work together, not to mention how large the scene became as more and more card structures were added and animated. Polygon and texture overheads were kept as light as possible by using Instances under a Cloner to lay down the main credit card grid. Nicola Gastaldi, the lead CINEMA 4D artist, explained why they did it that way: “We made it editable so we could change those main instances in other credit cards, or buildings made of credit cards, and then select some of these instances and animate them with a Fracture object and Plain or Shader effector.”

All along, overhead considerations were foremost in order to keep the project manageable. “To create the buildings, we used a Cloner and the instance of the credit card model. A Shader and a Color shader were used on the texture to keep the side of the cards white, but not the top of the building. A light Random effector helped us, giving a little bit of realness on the stack of cards. The Fracture object usually moves the pivot point to the center of the object, but not with the Instances. So, using Instances was the best choice for our project as we had total control of the cards and on their axis center. Even each card was an Extrude object of just one instanced rectangle spline. In this way, we could change the spline points at once,” Nicola revealed.

The other key element in the project was the very useful, and simple, character rigging module for the cat and the dog. In less than four hours they managed to fully model, rig and animate both of them. On the stadium scene, the team used Thinking Particles for the ticker-tape animation and the dynamics for the bouncing ball, which was nicely baked so they could precisely re-time the animation. To achieve a nice bouncing effect and a randomness on the animation of the buildings, the team chose to manually keyframe the cloners that were creating them. A Shader effector, a Random effector with a simple Cloner, nicely keyframed, were used to create unlimited animations in just a few minutes. For the camera, a free setup part of CS Tools called MoCam was used to help out.

The lighting system used throughout was GI, though this gave concerns that the system, a twin Mac Pro (3GHz dual-core Xenon) with 45 render clients, wouldn’t be able to cope with the 15k polygon scene. With 30 seconds of animation at 1080p, it made for a lot of rendering. Still, using Net Render, the render time of each frame was kept to a reasonable level, with around a minute for the simple scenes, and up to 45 minutes for the complex ones. Then, just as The Studio at Smoke & Mirrors thought it had been nailed, on delivery day the client wanted to change the main texture on the credit card throughout the whole video. Thanks to the way it had been set up in CINEMA 4D, it was very simple to implement the change, then sit back and wait for it to take another 12 hours to render again.

The project was then composited in Nuke and refined in Smoke before being graded using Resolve. The workflow from CINEMA 4D to Nuke worked brilliantly as camera data could be shared, as well as initial Nuke scripts being output straight from CINEMA 4D. Also, on this project, the team decided to render separate passes, rather than EXR files, due to the timing. However, they have used both methods with complete success.

You can see the MBNA advert running on television, on the web and also at The Studio at Smoke & Mirrors website!