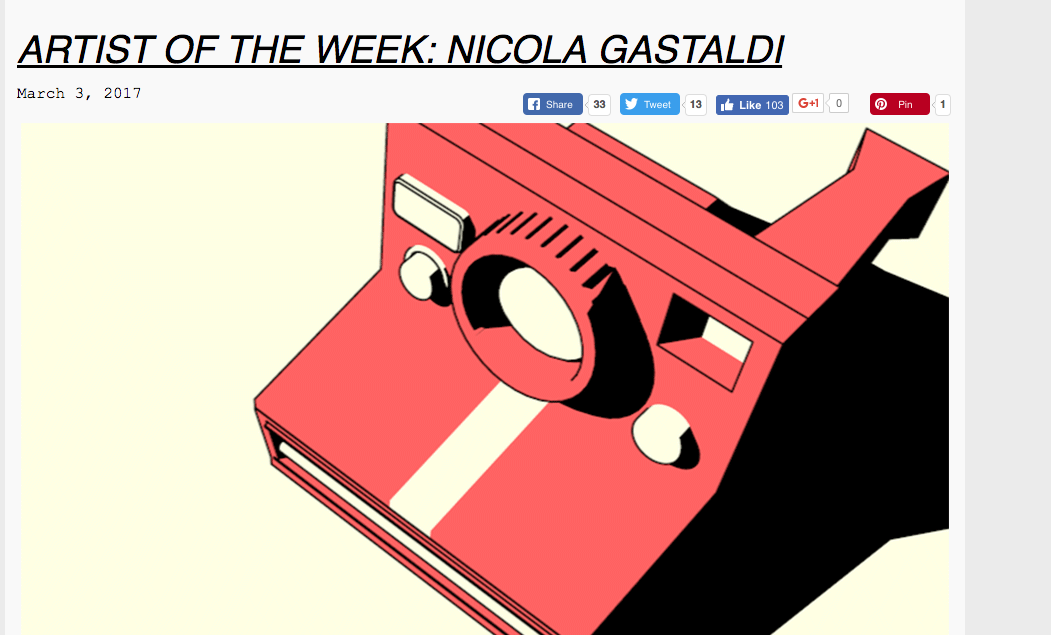 Nicola Gastaldi, a motions graphic designer set himself a task of producing one gif every day for 100 days. What started out as a personal project soon gained wide recognition and we can definitely see why. We find out what led him to begin this personal project and discover the ins and outs of this personal challenge.

UO: Tell us about your ‘Gastaloop’ project.

The Gastaloops is a series of animated gifs done following some strong limitations: the gifs share the same colour palette (just 3 colours, no shadings), the same length (50 frames, 2 seconds) the same size (800x600px) and have to loop. But the main rule of the project is that I had to create one new Gastaloop every day, for 100 days.

UO: Where did the inspiration for your project come from?
The inspiration arrived from a really mixed bag full of experiences and artists that I love. First of all, of course, MC Escher, Bruno Munari, Franco Grignani. They’re like my life heroes, pure admiration and devotion for them. And, I can say that I was also forced to start the Gastaloops project by my adoration towards two great artists: Beeple and Malika Favre. Beeple has been creating a new image every day for almost 10 years. That’s simply impressive. Malika is one of the most talented (and famous) illustrators I’ve ever seen. I’ve been lucky to meet her and I’ve been blown away by her words about how you can create your own style through repetition. And she was right: when I look at my gifs together, they just look nice.

UO: How did you decide upon the style for the gifs?
The style itself has been affected by some technical limitations. The gifs must have less than 256 colours, the shadings don’t work well and the size is crucial. Using 3 colours allowed me to optimise the result. The colour palette is a bit random, I have to admit. I love those three colours. But I chose those exact RGB values in order to remember them easily. The white is 255-255-230, the red is 255-100-100 and the black is simply 0-0-0. The 50 frames are a good length, not too short and not too long. I also wanted to share my gifs on dribbble that has some other limitations (max 8mb size).

UO: Producing one gif everyday for 100 days must have been a big challenge. How did you think of something different and interesting to create every day?

It surely was. Some days I found myself struggling to create and deliver the first thing I had in mind at 11.45pm. I really didn’t want to miss any days! After a few weeks, I had to start carrying around a notebook where I was writing down anything. I ended up having pages full of random words that I was then putting together in the gifs. But a lot of days an idea was coming up during breakfast, it was growing during my daily job in the office and in the evening it was just bursting out, while I was sitting on my couch with my laptop on my legs. But overall, it was definitely coming up with and an idea that was taking more hours and effort than of actually doing the gif.

UO: Is a daily project something you’d recommend to other artists?
Absolutely. And really this is not a gimmick. If 100 days seems too long, then try a 30 days project. But it has to be a daily project. A lot of really talented people are trying to achieve perfection refining and tweaking the same image for months. I believe that perfection is overrated. We should aim to progress. And that must be achieved with repetition, doing the same thing over and over and over again, changing it slightly, making it better. But forcing ourselves to deliver and face consequences, mistakes, failures is something as important as making something nice.

UO: Do you have a favourite gif from this project?
It’s the one with the man trying to push back the clock hand.
I think it perfectly represents the whole idea of the project, the struggle of working against the time.

UO: Did you ever expect this project to receive the attention it did?

Actually, I didn’t. And, honestly, sometimes I didn’t even know if I was going to never miss one day! The Gastaloops evolved organically through the weeks and the months. Even the music video is just a random collaboration with an old friend. When I reached 100, I wanted to celebrate with a big edit. I wanted a track and I asked my good friend Allo, that has a great music label called “La Valigetta” if he had anyone in his label roster that could fit in my edit: I needed a song exactly at 120 BPM. He sent me Out by IISO. I fell in love with the track instantly. I didn’t do much: I juxtaposed my gifs and I let the track flow.The result was stunning. That’s what I call serendipity. Today, we’ve been awarded the incredible Vimeo STAFF PICKS BADGE!

UO: What is your background in art?
I’ve never studied art and, being completely honest, my drawing skills are really poor. But since I was a kid, I’ve always been interested in video games. You know, in the 80s having a Commodore 64 meant that was relatively easy to open the code of the games and start to mess around. The results were quite interesting. I can say that I have that approach with everything: I always try to break what I have in my hands, see if I can do something different with it, in a way remixing it. So, yes, I learnt everything trying and failing and breaking.
I studied Communication Studies and I have a Master degree in Television and Media, though. I started in 1999 playing with Premiere and then Final Cut. I moved into Flash and After Effects. And since then I’ve just progressed, now in Cinema 4D, Houdini and a bunch of plugins.

UO: How do you stay creatively motivated?

I don’t know exactly what pushes me. Probably the fear of becoming a boring person. Or maybe it’s the ambition to do something better. Or the fact that I know perfectly that we have a limited time in front of us and I don’t want to waste it not trying, at least. Surely London is the perfect place to be, the buzz is everywhere, on the walls, in the unique smell of Old Compton Street in the morning, in the loud nights in Shoreditch or on the rooftops in Peckham. I met some amazing people here that are surely, even unknowingly, one of the reasons I’m always thinking, “What should I do next?”

UO: What are you up to now?
I just finished an art installation called after // b e y o n d, a projection mapping over a paper sculpture I have created. After an exhibition in London, I’m going to present it in Mannheim in Germany at B-Seite festival. I’m also starting a new gif series, it’ll probably be another 100 days (or more?). I’m pretty excited by the look of it but I have yet to set my limits and to be exactly sure about what I want to end up with. I have some projects for the Gastaloops as well, I would really love to show them in a gallery, one looping gif in a single different screen, hopefully, someone will help me with this idea!

Join the discussion and tell us your opinion.