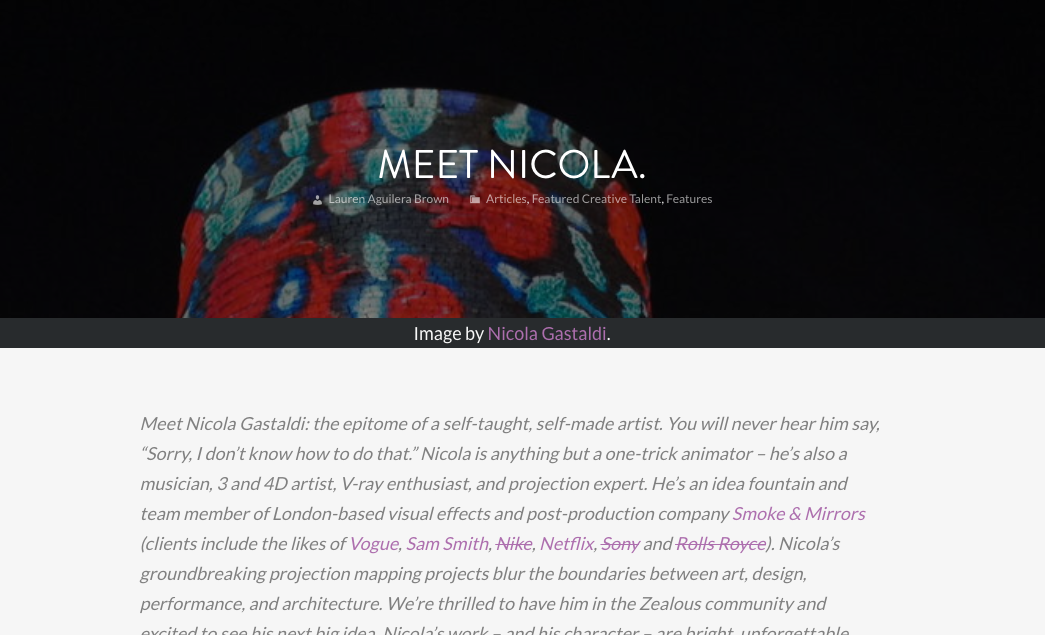 Another great interview on Zealous!

Meet Nicola Gastaldi: the epitome of a self-taught, self-made artist. You will never hear him say, “Sorry, I don’t know how to do that.” Nicola is anything but a one-trick animator – he’s also a musician, 3 and 4D artist, V-ray enthusiast, and projection expert. He’s an idea fountain and team member of London-based visual effects and post-production company Smoke & Mirrors (clients include the likes of Vogue, Sam Smith, Nike, Netflix, Sony and Rolls Royce). Nicola’s groundbreaking projection mapping projects blur the boundaries between art, design, performance, and architecture. We’re thrilled to have him in the Zealous community and excited to see his next big idea. Nicola’s work – and his character – are bright, unforgettable, and multidimensional.

LAB: How / when did you get into motion graphics?
NG: I worked in the television industry as a writer, but I soon realised that it wasn’t a nice environment, so I became a filmmaker, shooting, and editing in Final Cut 7 on my beloved MacBook G4. I always tried to have a proactive approach to problems, so when few clients asked for simple tweaks or sky replacements, I learned After Effects 6 (not CS6, hey!) instead of saying that I couldn’t do the work in Final Cut. From that point was probably a natural evolution: I spent more and more time in After Effects, then Cinema 4D, then Vray, and now Houdini. My love for crazy visual effects comes from the eighties and the work of Zbigniew Rybczyński and Jan Švankmajer – if you don’t know them, spend some time looking at the most amazing stuff ever!

LAB: Was projection mapping a natural stepping stone from motion graphics or did you get involved in that for a different reason?

NG: In 2009 I started working for an amazing small studio based in North of Italy – Mou Factory. They mostly did motion graphics for live corporate events. That could sound boring and unattractive, but the reality was that we were free to pitch on broad briefs. Also, because of the nature of the live events, the clients were interested in bigger and louder videos. We focused on projection mappings because 2009 and 2010 were so niche: very few people were actually able to do it without software or media managers’ help. We pre-rendered all the distortions and synced the videos in Watchout manually. We started on a single projector and projection mapped on an arch in the centre of Milan, and we ended up working on a beautiful 360-degree projection (over 16 projectors) on the Maiden tower in Baku.

LAB: What’s the biggest challenge you face in your work / medium? How do you overcome those challenges?

NG: The technical challenges can be daunting at the beginning, but I’ve learned not to worry too much about them. As a producer, I loved working with always said “it’ll be fine!”. And it’s true! There’s a great 3D community online, and I have some friends who are also great 3D artists. We love to help each other. The real struggle is usually in coming up with new exciting idea that fits the client’s brief and my ambitions to create something great every time, especially given budget and time constraints. But once we have all agreed, it’s just a matter of doing the job.

LAB: What excites you most about your work?

NG: Everything? No seriously, everything. I love the fact that we meet a lot of nice people, great designers, and creatives. Also, because of the nature of the industry I work in (more commercially-oriented), we deliver a job every two or three weeks, so we are not easily bored. When I do projection mappings, well, I just adore that every project needs to be different, because the surface we use is new each time, from a small wall in a garage to a huge twisted skyscraper in Dubai. And on the opening night of the projection, I always cry when I hear the audience cheering and applauding. It’s just great.

LAB: What other creative discipline inspires you? Why?

NG: Many years ago I read R. Pirsig’s Zen and the Art of Motorcycle Maintenance. It’s not really about engines or Buddha. One line struck my mind:

“The Buddha, the Godhead, resides quite as comfortably in the circuits of a digital computer or the gears of a cycle transmission as he does at the top of the mountain, or in the petals of a flower. To think otherwise is to demean the Buddha – which is to demean oneself.”

Broadly speaking, I think everything can be potentially creative, from rebuilding a Lambretta engine to baking a loaf of sourdough, snowboarding, screen printing, calligraphy, illustrations, 1960’s Italian cinema, 1920’s design. Keeping your eyes and ears open is a great source of inspiration and compiling a list of disciplines that interest me could be really time consuming. Maybe I should tell you what really doesn’t inspire me: football. Really. So boring.

LAB: You’re a musician as well, correct? Could you say a bit about the music you make any why you offer it royalty-free?

NG: Well, thanks for asking and saying that I’m a musician! The truth is that I’m just a guy who loves to play his guitar in his room. I’ve always been interested in making music with the computer. I started using Pro-Tracker on my Amiga when I was a kid, then Sound Tracker and Fast Tracker on my first Pentium – with Cubase and Cakewalk, everything changed. I started recording small ideas and lost them all when my first hard drive crashed and when I moved from Cubase to Pro Tools. I told myself, Stop keeping your songs in your closet and free them! I found Audiojungle few years ago and, even if I’m not making much money out of it, it pays me stock footage, other royalty free songs or After Effects template. It’s actually a really good way to fuel creativity and keep the focus, finishing a project that, in a different way, would have been dropped otherwise.

LAB: On your website, you include “100 Facts About Me” – what inspired you to make that list? Why do you think people read it? Did you write it over a period of time or all at once?

NG: Oh wow, I never actually thought someone could read them, that’s really funny! As I said, I always loved to write. My website is actually really old (I started it in 1997). It was just a blog, back in the days. These days if you want to know about someone you can just google them, go on their Facebook page, see their likes and dislikes. 20 years (!) ago we just made lists. But my website changed its face so many times, like me. Sometimes I just think I should just keep my works on it, but, would it be the same? Now and then I write something new and remove something old.

NG: Definitely a good question that deserves a good coup de théâtre: I’m a father now, I have a beautiful daughter and, well, I’m completely overwhelmed by this new feeling.